Many find the on-going and meaningful commitment to continual improvement displayed by Organisations like Kier difficult to achieve. For some in Kier’s position, the temptation is to put things on hold when numerous areas of their systems are already exceeding the expectations of International auditors and regulators alike; more so in recessions but…not so Kier.

Comment From Ed:
Understandably, many Organisations do trim down their budgets for the more general types of health & safety related training. The logic behind it says that if the expenditure on training has not allowed me to remain temporarily self-sufficient then, what has it achieved?

Where we are finding an on-going commitment to expend on training is in the field of Industrial Accident Investigation. Any system can be defeated and many are realising that the means to further protect the Organisation and its employees from that reality lies in the ability to scientifically and logically identify the causes of the non-conformances that, from time to time, inevitably emerge.

Having considered a number of courses and providers, Kier’s Senior Investigator decided that he and a colleague would try out the IIAI Lead Accident Investigators’ Certificate course. As a result, and by the end of 2011, four Kier employees had completed not only their Lead Certificate courses but, the IIAI Diploma in Industrial Accident Investigation and Analysis as well. Following two more highly successful five-day sessions with Neucom Ltd in May and July 2012, Kier now has 23 employees who hold the IIAI Lead Certificate, 22 who hold the IIAI’s Investigative Interviewing Skills certificate and, already stated, 4 who hold IIAI Diplomas. Pictured below are some of the Kier delegates from the July sessions. 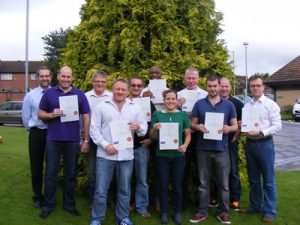 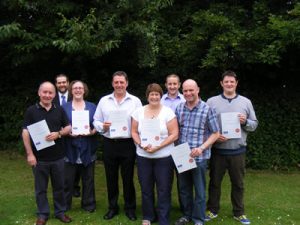